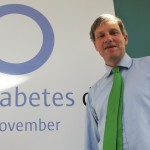 END_OF_DOCUMENT_TOKEN_TO_BE_REPLACED

GLP-1 receptor agonists (Exenetide and Liraglutide) are a relatively new form of treatment for diabetes which is taking the world by storm.  They are injectable treatments that cause the body’s level of GLP-1 to rise and in patients with type II diabetes this causes beneficial effects in that blood glucose levels fall and in addition people loose a significant amount of weight.  This action of reducing weight singles out these treatments as being unique and it is why they are being used extensively in clincial practice.  Professor David Russell-Jones was the head of a large study comparing GLP-1 (Liraglutide) with insulin in patients who were on maximum oral therapy.  The study has been published in the top european Journal, Diabetologia, and has lead to a change in clinical practice.

In summary, the study showed that Liraglutide out performed insulin in that a superior reduction in blood sugars was maintained, there was also significant weight loss where those randomised on insulin put on significant amounts of weight.  Blood pressure was also reduced in those on Liraglutide.

In 2009 there was a publication in the journal Diabetologia suggesting patients on one particular type of insulin may be at a higher risk of developing malignancy when compared to other treatments.

This was a highly controversial study, initially from a German group, that studied over one hundred thousand German patients on various treatments.  The European Association for the Study of Diabetes (EASD) commissioned four other studies to look at this whole topic and all of the studies were published in one edition of the European journal Diabetologia.  The studies have achieved great notoriety and there is huge controversy about the results, what has become very clear is that there is an association between type II diabetes and an increased risk for a whole range of different malignancies and this whole topic has become the focus for much activity and debate.

END_OF_DOCUMENT_TOKEN_TO_BE_REPLACED

November 4 in Endocrinology News by Kathy | No Comments