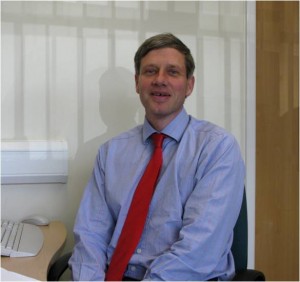 David Russell-Jones qualified from Guy’s and St Thomas’ Hospital medical school in 1985.  He did his SHO training in the ‘golden circle’ of famous London postgraduate institutions, including the Hammersmith, Brompton and Queens Square, before returning to St Thomas’ as registrar.  He performed an MD under the direction of Professor Peter Sonksen.

He was appointed lecturer at Guy’s and St Thomas’ followed by Senior Lecturer and Consultant Physician in 1994.  In 1998 he was appointed Professor of Diabetes and Endocrinology at the University of Surrey and Consultant Physician at the Royal Surrey County Hospital where he runs a full specialist diabetes and endocrine service for patients, including a large pituitary clinic.  He is a full part of the general medical ‘take’ in addition to running specialist clinics and doing extensive research. He has recently been appointed by NHS England to be a member of the “Clinical Reference Group” for both specialist Endocrinology and specilaist Diabetes.  His department has attracted large research grants and was rated 5*A in the recent university research assessment exercise.

Professor Russell-Jones raised £2 million and built an innovative ambulatory care and research centre, called the cedar centre, for patients with diabetes and endocrine disorders.  He persuaded Sir Nicholas Grimshaw (of the Eden project and Waterloo International fame) to design the centre which was opened by Prince Andrew in 2005.  The cedar centre was then donated to the NHS.

Professor Russell-Jones won substantial funding from the Wolfston Foundation to set up a ‘state of the art’ mass spectrometry facility at the University of Surrey (Wolfson transitional research laboratories) of which he is Clinical Director.  This unit attracts substantial research grant funding, much from abroad, to use stable isotopes to understand physiological processes or effects of novel drug compounds.

His research interests include the use of stable isotopes to understand peptide hormone physiology.  He has published in excess of 100 peer reviewed papers on insulin, IGF-1 and growth hormone, he has also been asked to review for the world’s top Diabetes and Endocrine journals and wrote a lead article for the BMJ. A full list of his pubilcations can be found on the PubMed website (link below).

He is an invited speaker at prestigious diabetes and endocrine meetings all over the world and in the last few years has spoken at meetings in the USA, Canada, Finland, Belgium, Denmark, Sweden, Italy, France, Argentina, Ireland, Switzerland, China, India and Austria where he presented at the European Association for the Study of Diabetes (EASD) symposium on cancer and insulin which was attended by approximately 8000 delegates.  He is also a past plenary speaker at the biannual meeting of the Growth Hormone Research Society and Principal Investigator of a number of multi-national clinical trials that have changed medical practice.

In his spare time he has an active interest in racing sailboats and has represented the UK in the past.

Link to PubMed for a list and abstracts of all publications